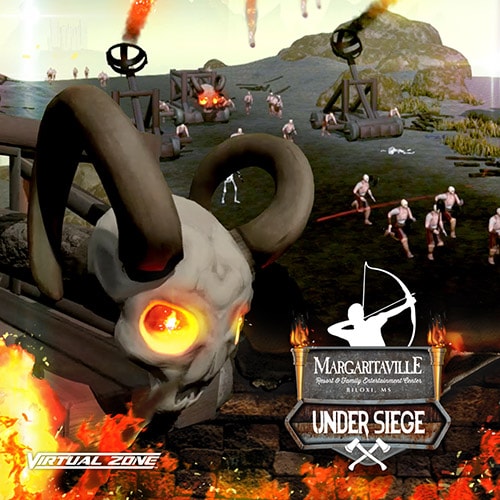 BILOXI, MS – A virtual world has become reality at Margaritaville Resort & Family Entertainment Center. Virtual Zone is a two-player game system that immerses guests into a world where their castle is under siege and they must protect it with bow- and- arrow weaponry. This technology is the first of its kind on the Mississippi Gulf Coast to be used in an arcade setting.

Chief Operations Officer of Margaritaville, Joe Farruggio, states, “There is no other attraction like this in our area. With this technology, players are transported to another world and feel like they’ve become a part of the game. What makes Virtual Zone a great asset, is not only do the players experience the game, but guests outside the booth can watch the live game play via the monitors on the walls of the game.”

The Virtual Zone is a VR platform that enables players to compete in spirited virtual reality tournaments and enjoy competitive VR games. There are three featured tournament-compatible games: SiegeVR™, ArcheryVR™ and ArcadeSagaVR. Both SiegeVR™ and ArcheryVR games are competition-driven virtual reality experiences that leverage HTC Vive VR technology to transport players to a competitive virtual world where they engage in a bow-and-arrow battle to defend a castle from oncoming aggressors. Player scoring is based on the number of targets hit.

Virtual Zone opens at 10am Friday, August 17th for the public to play with purchased game cards from the kiosks throughout the Escape Family Entertainment Center or at the Power-Up The Player’s Club desk on the second floor. (Restrictions Apply. Management reserves all rights.)